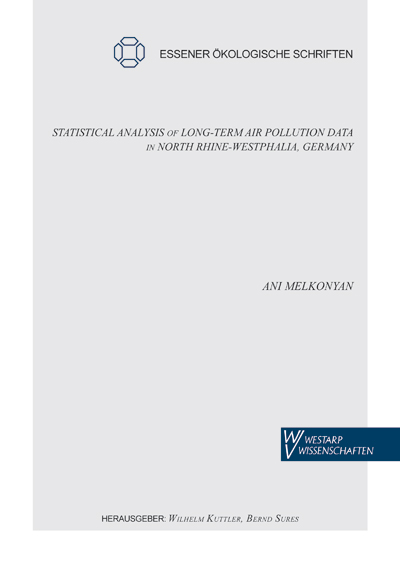 Developed legislation norms at the end of 1970’s, structural changes in economy, implementation of filters in both vehicles and industries improved air quality of North Rhine-Westphalia. Having different magnitude at the industrial, traffic and background areas for different air pollutants these changes made the main aim of the given study to analyse the historical development of air pollutants at the different kind of stations distributed within the state.
The sharpest decrease in air pollution between 1983-2007 was observed in CO, NO and SO2 concentrations whereas insignificant changes in NO2 (15-20 %) were registered, because of the fact that catalytic filters in vehicles favour emissions of NO2 as a primary pollutant. Changes in NO/NO2 ratio together with increased temperature favoured enhanced ozone concentrations (20 %), which appears to be the indicator of summer smog. Hence, smog episodes in 2003 and 2006 have also been clearly observed in regard to maximum temperature change at industrial and background stations, showing that though ozone forming potential is higher at background stations.
The results of Fourier transformation showed clearly defined 7-days cycles at industrial, traffic and urban background stations, which was not the case at the pure background stations. Estimation of the amplitude of concentrations differences on working days and weekends showed a clear increase during the last decades proving increase of anthropogenic effect on pollution levels.